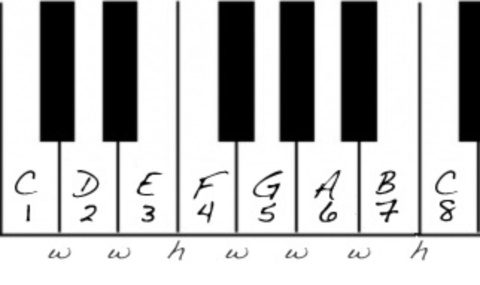 Isn't that neat? A nice set of note names that is easy to remember. How about these ones?

That's quite nice too. The advantage here is they follow some natural order, albeit at the expense of a little personality. Okay then, how about these note names?

At first glance, that looks a lot like the first example but it's not. You have me instead of mi and le instead of la. It's a minor scale. Using English notation you get

Eugh, even worse. What is that 'b' thingy anyway?  Our neat note naming system has already become confusing.

The problem lies with what I call diatonic bias. Diatonic scales are seven note scales obtained by following six circles of fifths from any note. They have all sorts of wonderful magical properties like evenness and consonant harmonic intervals and chords. It's no wonder they formed the basis of Western music. Pentatonic scales, which evolved in different places around the world, also have similar properties.

All our musical nomenclature and notation evolved to accommodate diatonic scales. It made sense to have an A, a B, a C, a D and so forth in every scale. It didn't matter if it was called A# or Bb, you had all the letters from A to G in every scale. Besides, back then A# and Bb were different notes. Reading music from a staff with absolute pitches took extra work because you had to remember which notes were 'sharp' or 'flat'.

Then came along equal temperament and pitch standards. A# became the same note as Bb and overnight we had the concept of a chromatic scale. 12 distinct notes that we could use to play any diatonic scale in any key. So much simpler!

The diatonic note names and staff stuck though, so now we use names like these for our twelve notes:

What a mess. If I see Ab, A and A# (or a Le, La and a Li) I think they must be related. In fact they're completely unrelated pitches. Together they form the most dissonant intervals out there. They only have the same names so we can have an 'A' or a 'La' in every diatonic scale.

If we simply numbered pitches from 1 to 12 we'd have several advantages. Firstly, it's easy to determine the interval between notes by doing a simple subtraction. This makes the music easier to understand since the relationship between notes and chords is more visible. Secondly, it's easier to play because you just have to count frets or keys or half steps. Thirdly, chromatic notation is much simpler.

Take a look at this piece of music on a diatonic staff and on a chromatic staff. Which do you think makes more sense? [source: musicnotation.org]

Diatonic staffs like this are why I gave up reading music. It's just distracting.

Naming intervals by their harmonic relationship could have been more meaningful and more portable to other modes. When you look at intervals ordered by their harmonic number you can see why some are used more frequently than others. There is some sense to it.

Harmonic naming would have been unlikely though because of the way simple instruments are created with pitches in ascending order. Solfege had an opportunity to give personality to intervals by giving them non-consecutive names. Unfortunately it fell subject to diatonic bias with the addition of all the whole Di and De and Do and Re and Ri and Ra nonsense.

The Common Era does give us some meaningful names for intervals (or more correctly, scale degrees), however unsurprisingly it only gives us seven.

Intervals have been shown to have consistent emotional effects amongst listeners so there is potential for an emotion-based naming system. Here are some emotions commonly attributed to different intervals. [source: howmusicreallyworks.com]

Music has a long history of evolution that we can't escape. Our naming system is just another artifact. While diatonic scales are great, naming everything to accommodate them is limiting. We can come up with more useful names for our pitches and intervals, perhaps based on the chromatic scale or psychoacoustics.